TSDuck users, we need your assistance to promote the project. Please read this.

TSDuck is an extensible toolkit for MPEG transport streams. It is used in digital television systems for test, monitoring, integration, debug, lab, demo.

In practice, TSDuck can be used for:

TSDuck is developed in C++ in a modular architecture. It is easy to extend it through plugins. In fact, the primary requirement for TSDuck architecture was to be able to implement any new feature within a couple of hours, which happened to be the case most of the time.

To be easily extended, TSDuck needed to be simple. TSDuck is a collection of command line tools and plugins. There is no sophisticated GUI. Each utility or plugin performs only one elementary feature but they can be combined in any order.

For C++ developers, TSDuck is also a large library to manipulate MPEG transport streams. Java and Python developers can use bindings in their languages for TSDuck high-level features.

In short, TSDuck shall be understood as a General-Purpose Toolbox for Digital TV Engineers and not as a specialized application for production operators.

And, by the way, TSDuck is Free and Open Source.

In each invocation of tsp, there are:

This is illustrated in the diagram below:

This example describes a test bed or demo infrastructure for MPE injection and MPE extraction.

The network infrastructure is illustrated in the diagram below.

In network 1, a media server multicasts a transport stream on address 224.250.250.1, port 9000. We want to encapsulate this UDP multicast stream in an existing transport stream using MPE. This existing TS is a live satellite feed which is received using a DVB tuner.

We also change the multicast destination address for the UDP stream to 230.2.3.4, port 7000, in the MPE-encapsulated datagrams. There is no particular reason for this, we just illustrate the feasibility.

The resulting transport stream with embedded MPE is then broadcast. Here, the broadcast network is a Dektec modulator, followed by another computer using a DVB tuner.

This computer is connected to a second network. Another instance of tsp extracts the datagrams from the MPE stream and multicasts them on its network using the modified destination address.

The first tsp command adds two services in the existing transport stream. One service carries the IP/MAC Notification Table (INT). The other one carries the MPE stream. We create a fully DVB-conformant signalization for these two services.

The second tsp command extracts the MPE stream from the received TS and forwards all decapsulated UDP multicast datagrams on the local network.

This example is fully described in the TSDuck User's Guide with all details and corresponding commands.

In addition to tsp, the command tsswitch can be used to switch inputs between a set of transport streams using the same input and output plugins as tsp. Switching between inputs can be performed automatically at the end of each input or through a remote control application. The remote control protocol is extremely simple, based on text messages in UDP datagrams.

The remote control can be performed using simple command lines. The bash shell provides an easy way to redirect output to an UDP message. The following sample commands send UDP messages on port 4444 to system 127.0.0.1 (the local host). This is the easiest way to use the tsswitch remote control.

The following diagram illustrates a real-life example. To test a Conditional Access System and signalization, tsp is used to create a new transport stream from a live source. One real TS is received as input using a cheap USB or PCI DVB-T tuner. This TS and all its services are renamed, creating a "new TS" in the network. To test the CAS, tsp interacts with a real ECMG and a real EMMG using the standard DVB SimulCrypt protocols. One service, initially in the clear, is scrambled. tsp generates the control words, scrambles the content and inserts ECM's and EMM's. Finally, a set-top box receives all live transponders plus the new one we create. 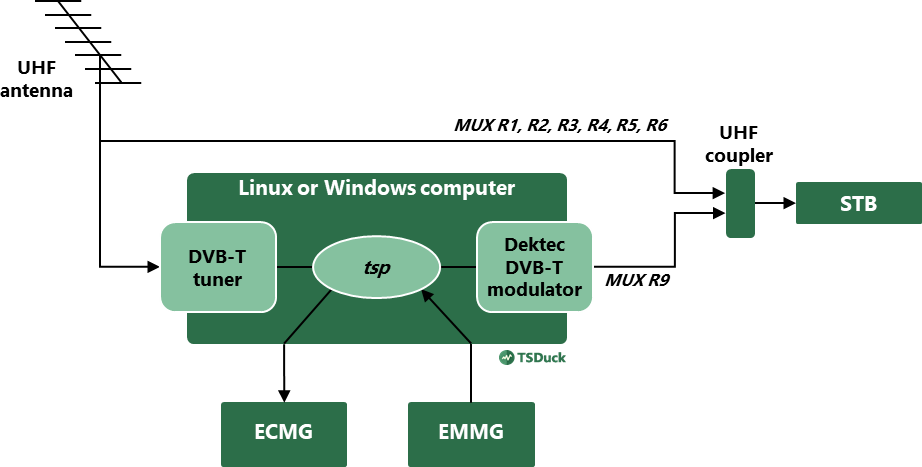 Everything is done in one single tsp process. The command is the following. For clarity, the details such as tuning parameters, access criteria, IP addresses and ports, are represented as environment variables.

This command is complex but rational. The option -I on the first line specifies the input plugin and its arguments. Here, the input plugin is dvb which drives DVB tuners. Each option -P specifies a packet processor plugin and its options. The plugins tsrename and svrename respectively rename the transport stream and a service. The plugin scrambler is a DVB scrambler on one service. It generates control words, interacts with a standard ECMG and insert ECM's. It also updates the PMT of the service to declare the ECM PID. The plugin cat modifies or creates the CAT to declare a new EMM stream. The plugin datainject implements a DVB SimulCrypt EMM/PDG inserter. It is used as a server by a standard EMMG to insert EMM's, just as if it was a MUX. Finally, the option -O on the last line specifies the output plugin and its arguments. Here, the output plugin is dektec which drives a Dektec modulator, a PCIe board in the computer.

For more details, refer to the TSDuck User's Guide.

Of course, such a complex command should be maintained and edited in a shell script. Unless of course we enjoy retyping it every time.

Because of its modular structure, TSDuck is better used with a flexible shell. On Windows systems, we may use PowerShell, Cygwin or MSys (DOS command line windows should now be reserved to polymorphic deviants only).

TSDuck provides many ways to manipulate PSI/SI and other types of MPEG tables. Tables can be extracted, examined, injected or modified on the fly using specific plugins for tsp.

Tables can be manipulated in several formats:

TSDuck utilities manipulate tables in any of these formats and converts between them. Specifically, the command tstabcomp is a table compiler. It takes XML source files as input, compiles the tables they contain and output binary section files. Thus, we can create any arbitrary table from scratch and build the corresponding binary sections to inject them in a transport stream. The command tstabcomp is also a table decompiler which can recreate the XML representation of tables from their binary sections.

More generally, all TSDuck commands can manipulate tables in binary or XML format equally. Tables can be captured from a live transport stream and directly saved in XML format. We can then edit the XML files to modify the tables and reinject them in any other transport stream.

The expected XML input format is fully documented in the TSDuck User's Guide. Briefly, an input XML file uses as root node. The root node contains any number of tables. The following sample XML file contains the definition for simple (and incomplete) PAT and PMT:

Let's look at the various steps in a real example. We need to reproduce the case of a broadcast stream (satellite, terrestrial, whatever) with a specially crafted NIT. The plugin nit in tsp provides a convenient way to modify a NIT on the fly. But let's assume that the modifications we need are so specific that this plugin cannot do what we want.

First, we capture the original NIT from the live stream and save it in XML format:

Now, we manually edit the XML file using any text editor and apply the specific modifications we need. Then, we can directly inject it in the stream:

Using TSDuck as a library 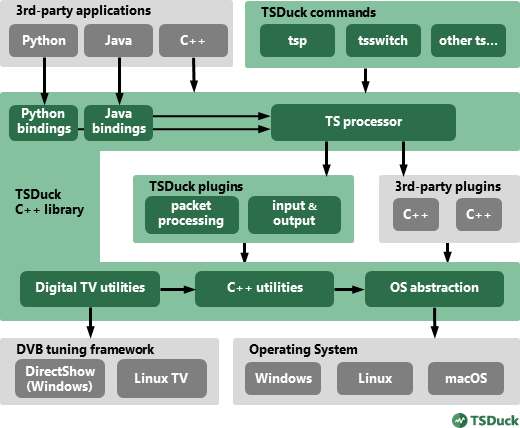 All C++ classes in the TSDuck library are documented using Doxygen.

There is a binary installer for the TSDuck development environment too. So, there is no need to rebuild TSDuck first. See more details here.

For Python and Java developers, TSDuck bindings exist to allow running transport stream processing pipelines from Python or Java applications. But since TSDuck is essentially a large C++ library, only a limited set of features is accessible from applications in other languages.

Here is a summary of all command line utilities and tsp plugins which are installed with TSDuck version 3.26-2257.

TSDuck is open source and released under the BSD license. It is developed in C++ and designed to be portable. TSDuck is built and tested for Windows, Linux and macOS. Please see the list of useful links in the side menu.

Pre-built binary packages are available for Windows, Fedora, Ubuntu, CentOS/RedHat (Intel) and Raspbian (Raspberry Pi). See the Download section in the side menu.

Rebuilding TSDuck, with or without its binary installers and packages, is documented here.

Redistribution and use in source and binary forms, with or without modification, are permitted provided that the following conditions are met:

This software is provided by the copyright holders and contributors "as is" and any express or implied warranties, including, but not limited to, the implied warranties of merchantability and fitness for a particular purpose are disclaimed. in no event shall the copyright owner or contributors be liable for any direct, indirect, incidental, special, exemplary, or consequential damages (including, but not limited to, procurement of substitute goods or services; loss of use, data, or profits; or business interruption) however caused and on any theory of liability, whether in contract, strict liability, or tort (including negligence or otherwise) arising in any way out of the use of this software, even if advised of the possibility of such damage.